Having had a big chilli last night, my stomach was not particularly happy. This was one of those days where I really couldn’t be bothered to race, but I’d entered this one so I could take a few photographs of the estate whilst there. It wasn’t about time, or training effort, just getting around, and getting a few pics.

At 08:00 I set off in the direction of Worksop, to find my way to the Welbeck Estate. The name of this run is because this estate is a grade 2 registered park, and is home to an artisan food community - hence the name of this event. I arrived there at around 09:20 - it was easy to find. The walk from the car park field to the events village was very very short so to get my ~1 mile warm-up done I ran wherever my legs took me. Fortunately my stomach had settled on the drive over.

The canicross runners set off at 10:00, and us 10K runners set off ten minutes later. There were two of us at the front, I was planning around 6:30-6:40/mi as I didn’t want to push too hard on this - I’m tapering after all, and I wasn’t sure yet how my legs were recovering from the 22 mile run last weekend. The other guy was aiming for 6:15/mi so I knew he’d be disappearing off into the distance pretty quickly. When the race started I heard Amanda call that I’d be leading the race - no chance! We were neck and neck to start with, but after a few hundred metres he pulled ahead, and I dropped in behind. I could hear another runner behind me wasn’t that far away. After half a mile I stepped to the side to let him pass - I knew I wasn’t going to maintain pace so figured I may as well be out of his way early. Besides, it’d be someone for me to potentially chase down later if my legs felt good - that bit of extra motivation. I wasn’t going that fast, but I was already feeling drained. It was baking. Apt I suppose considering where we were.

As the first mile was coming to and end, we passed some of the buildings and rounded a corner to go through the ‘grotto’ a dark tunnel under the road. It was lines with cones with glow sticks so we could see where we were going. My prescription glasses react to light, so are often dark when I’m racing - they perhaps didn’t react quite as quickly to going into dark again, but coming out the other side I realised just how bright it was today. I was starting to feel quite warm too. This first mile was covered in 6:15, and the two in front of me weren’t that far ahead. I figured I should really slow down though otherwise I’d regret it later.

At 1.3 miles I overtook my first canicross runner, and felt more comfortable to have more runners about. It wouldn’t be quite as quiet. The next two miles were ten seconds slower each than the first mile, and passing the water station I decided not to stop. I figured I must be in third place still, as I was sure nobody else had passed me yet. I wondered how long I could hold that for.

When the route reached a lake with people fishing, the ground here was looser, and a long slow ascent began. I looked behind me and figured I’d got a while before anyone would catch up, so I walked for a bit. I was sure someone else was getting closer, so eventually it turned into a run-walk strategy until I reached the top, and the second water station. This stretch had been so warm, and at times the only respite from that oppression had been when there was a head wind. I just felt more tired than I felt I should have been. I wasn’t disappointed in myself though, I figured as long as race day goes okay in two weeks time, it’ll have been worth it. I had a sip of water whilst walking, discarded the cup, and ran down the hill. This was quite pleasant now, and I ran most of the way from there to the 9km. I walked again a couple of more times briefly when there was shade, and then took it easy until the last stretch when I picked up the pace a bit. It was after all, a very scenic race, and I kept spotting things that I wanted to photograph, but never actually did. 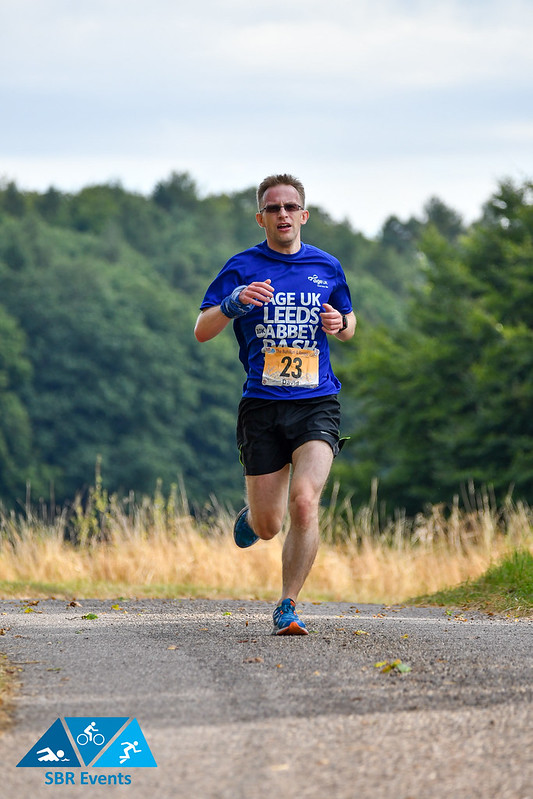 I finished the race in 43:20, 3rd out of 166, and first in my age category. I didn’t know this until much later though as for COVID security there wasn’t the usual place you could go to get your times. In all honesty I shouldn’t have got anything like the position I got, for the time I got - this only happened because there’s still so many people that aren’t back racing yet. One interesting note though, which I don’t know if it says something about the course, or the size of the field, but none of us broke sub-40. I can’t remember when I last raced a 10K so slowly, and even just a few weeks ago it was a few minutes faster than this. So, I’m inclined to think it’s a bit of both.

Events like this though are very safe, as the organisers are very careful despite the current UK guidelines meaning they don’t need to be. So, I collected my medal and some water, and spoke to Amanda briefly before heading back to my car. Another race was over, and it wasn’t that bad - I think I’m getting used to running around other people again. As promised, it was just over 10K to cover it being a trail run.

I never did take those photographs…